Climate action: The ripple became a swell and real progress is underway 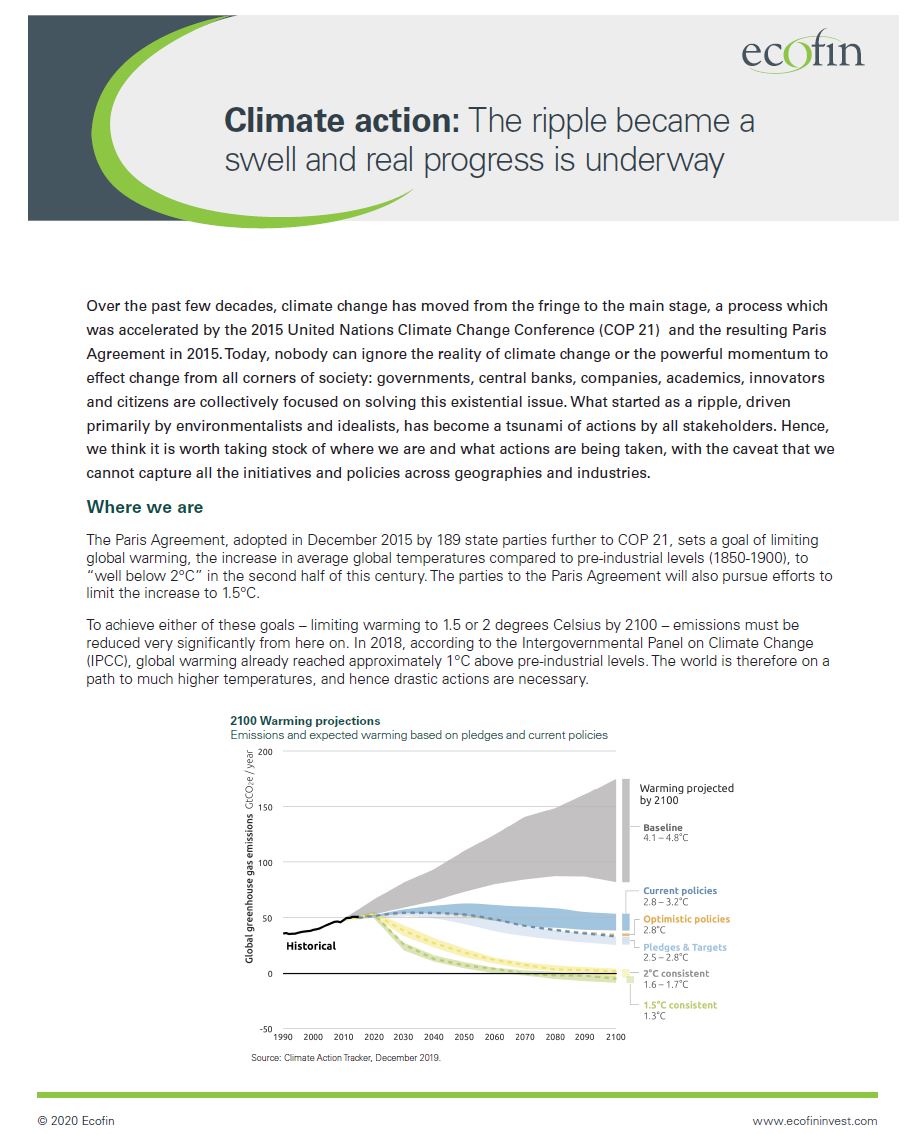 Over the past few decades, climate change has moved from the fringe to the main stage, a process which was accelerated by the 2015 United Nations Climate Change Conference (COP 21) and the resulting Paris Agreement in 2015. Today, nobody can ignore the reality of climate change or the powerful momentum to effect change from all corners of society: governments, central banks, companies, academics, innovators and citizens are collectively focused on solving this existential issue. What started as a ripple, driven primarily by environmentalists and idealists, has become a tsunami of actions by all stakeholders. Hence, we think it is worth taking stock of where we are and what actions are being taken, with the caveat that we cannot capture all the initiatives and policies across geographies and industries.

The Paris Agreement, adopted in December 2015 by 189 state parties further to COP 21, sets a goal of limiting global warming, the increase in average global temperatures compared to pre-industrial levels (1850-1900), to “well below 2°C” in the second half of this century. The parties to the Paris Agreement will also pursue efforts to limit the increase to 1.5°C.

To achieve either of these goals – limiting warming to 1.5 or 2 degrees Celsius by 2100 – emissions must be reduced very significantly from here on. In 2018, according to the Intergovernmental Panel on Climate Change (IPCC), global warming already reached approximately 1°C above pre-industrial levels. The world is therefore on a path to much higher temperatures, and hence drastic actions are necessary.

Emissions and expected warming based on pledges and current policies

In order to achieve tangible results soon, it is important to focus on the main sources of emissions:

There are many opportunities to tackle CO2 emissions. Some solutions are readily available today while others are a challenge as they require innovation, large investments or a change in behaviour.

Looking at the charts above, the world needs to address issues collectively and individually and, at the risk of stating the obvious, solutions are global but implementation is local. Hence, the following solutions should be put into effect with a sense of urgency as they would have the greatest impact using currently available technologies, creating no/little financial burden and requiring only manageable adjustments:

Other routes to lower emissions, such as green hydrogen, clean fuel for ships and planes and even reduced meat consumption are more complex and will require more time and money. These also apply to processes and habits that are less significant in terms of emissions than the processes for which we have suitable and available options today.

What are countries doing

Further to COP 21, most countries have translated their commitments to the Paris Agreement into laws, policy documents and national targets, and these are evolving and being updated constantly. For instance, at the Climate Action Summit in September 2019, 77 countries, ten regions and more than 100 cities committed to net-zero carbon emissions by 2050. By June 2020, more than 20 countries and regions had progressed from simple commitment to full adoption of net-zero targets: Austria, Bhutan, Chile, Costa Rica, Denmark, the E.U., Fiji, Finland, France, Germany, Hungary, Iceland, Ireland, Japan, the Marshall Islands, New Zealand, Norway, Portugal, Singapore, Slovenia, Spain, Sweden, Switzerland, Suriname and the United Kingdom. Moreover, as of June 2020, 120 countries are committed to working on net-zero targets through the Climate Ambition Alliance.

Given their weight in global emissions, we provide below an update on China, the U.S. and the E.U.

After the current Administration withdrew from the Paris Agreement, federal and state targets and policies have had conflicting objectives.

What companies are doing

A great deal. Irrespective of the actions of governments, many companies are developing and implementing strategic and operational shifts – some directional, some seismic – to make their businesses more sustainable, less carbon-intensive and more energy efficient. Below are examples of the growing momentum in commitments by companies around the world:

It is hard to avoid the conclusion that mitigation of the damaging consequences of global warming is now, finally, the top priority for policy makers, companies and most stakeholders. A myriad of initiatives is pulling in the same direction to drive greenhouse gas emissions lower, adopt cleaner and renewable energy sources, and promote more efficient use of those resources. Companies at the sharp end of innovation and strategies that will enable sustainability goals to be accomplished are growing and we expect their shares to be rewarding for investors.