Climate Action 12/21/2021
Democratic Sen. Joe Manchin is playing Scrooge to President’s Joe Biden’s $2 trillion Build Back Better (BBB) Act announcing that he would not support the bill as written, seemingly crushing any chance of it passing as things currently stand. Below some of Ecofin’s portfolio managers provide perspective on how this bill being killed could potentially impact their strategies.
View as PDF 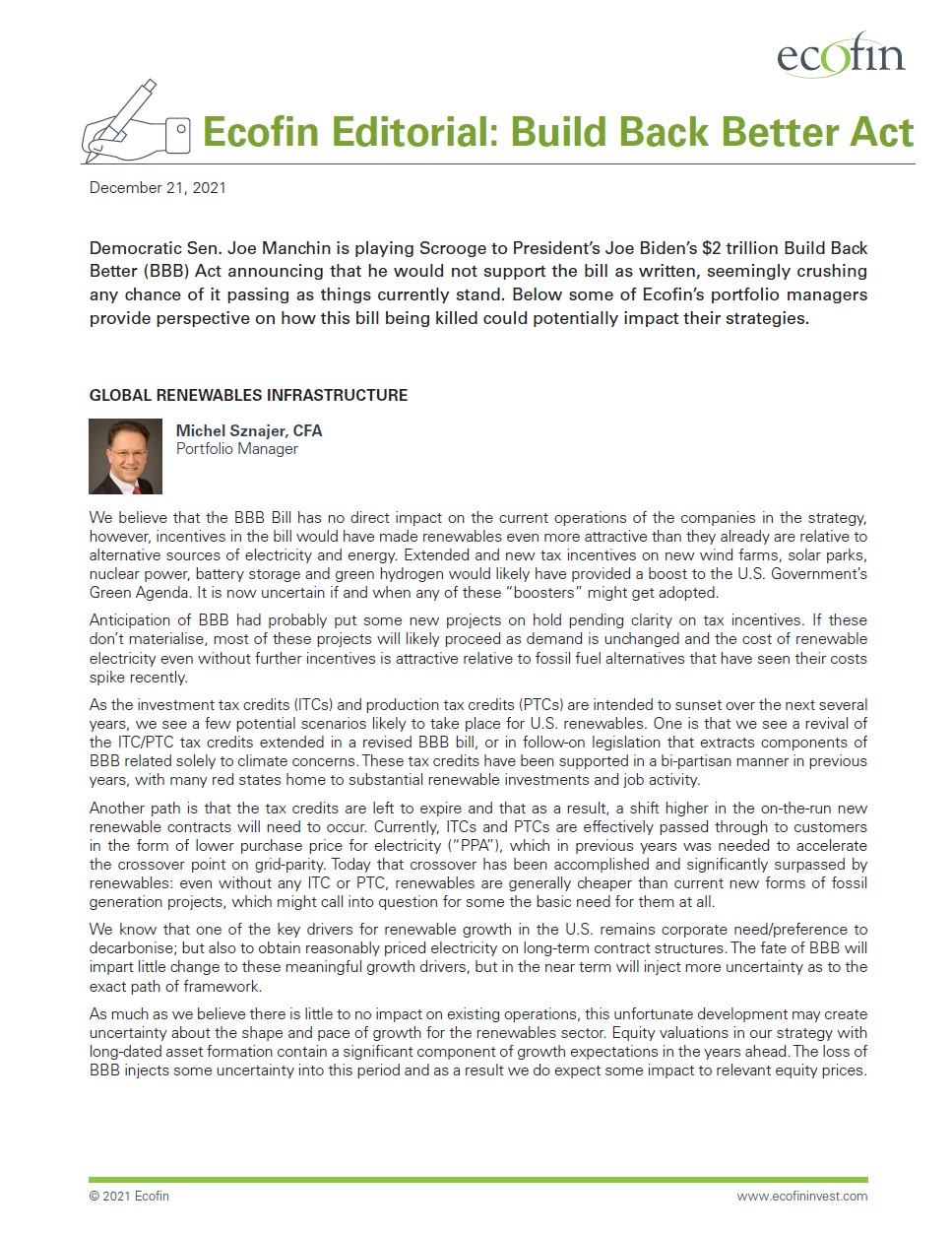 We believe that the BBB Bill has no direct impact on the current operations of the companies in the strategy, however, incentives in the bill would have made renewables even more attractive than they already are relative to alternative sources of electricity and energy. Extended and new tax incentives on new wind farms, solar parks, nuclear power, battery storage and green hydrogen would likely have provided a boost to the U.S. Government’s Green Agenda. It is now uncertain if and when any of these “boosters” might get adopted.

Anticipation of BBB had probably put some new projects on hold pending clarity on tax incentives. If these don’t materialise, most of these projects will likely proceed as demand is unchanged and the cost of renewable electricity even without further incentives is attractive relative to fossil fuel alternatives that have seen their costs spike recently.

As the investment tax credits (ITCs) and production tax credits (PTCs) are intended to sunset over the next several years, we see a few potential scenarios likely to take place for U.S. renewables. One is that we see a revival of the ITC/PTC tax credits extended in a revised BBB bill, or in follow-on legislation that extracts components of BBB related solely to climate concerns. These tax credits have been supported in a bi-partisan manner in previous years, with many red states home to substantial renewable investments and job activity.

Another path is that the tax credits are left to expire and that as a result, a shift higher in the on-the-run new renewable contracts will need to occur. Currently, ITCs and PTCs are effectively passed through to customers in the form of lower purchase price for electricity (“PPA”), which in previous years was needed to accelerate the crossover point on grid-parity. Today that crossover has been accomplished and significantly surpassed by renewables: even without any ITC or PTC, renewables are generally cheaper than current new forms of fossil generation projects, which might call into question for some the basic need for them at all.

We know that one of the key drivers for renewable growth in the U.S. remains corporate need/preference to decarbonise; but also to obtain reasonably priced electricity on long-term contract structures. The fate of BBB will impart little change to these meaningful growth drivers, but in the near term will inject more uncertainty as to the exact path of framework.

As much as we believe there is little to no impact on existing operations, this unfortunate development may create uncertainty about the shape and pace of growth for the renewables sector. Equity valuations in our strategy with long-dated asset formation contain a significant component of growth expectations in the years ahead. The loss of BBB injects some uncertainty into this period and as a result we do expect some impact to relevant equity prices.

Manchin’s comments on Sunday suggest that the probability of the current BBB passing have dropped close to zero. In our view, the probability of a slimmed down version of the Bill, which would leave the green elements mostly intact has also dropped well below 50%. This significant drop in probability of incentives has further reduced the chance of a positive catalyst and could lead to continued underperformance of exposed stocks into year end and potentially also early Q1’22. Most U.S. exposure in the strategy is found within utilities, solar, and storage, though the impact is expected to mostly be on the growth side with little change to existing cash flows. Albeit, sentiment and expectations have now dropped meaningfully since earlier in the year.

White House commentary in the next days will provide an important window to the ability to resurrect any deal from BBB. We believe this development is negative for investor sentiment across much of the energy transition space as the bill was not only a targeted form of financial support for renewables, storage, green hydrogen and electric vehicles, but also importantly signalled a somewhat unprecedented U.S. intent to accelerate decarbonisation.

Assuming BBB is dead, we see more options for current policies to be extended through an extenders package - such as solar ITC and wind PTC. On the other hand, the parts of BBB that required new legislation, such as green hydrogen incentives, standalone storage ITCs, and domestic manufacturing credits, now have a lower probability of making it into legislation.

ITCs/PTCs are a topic which enjoys bipartisan support as we’ve seen in the past, and may likely get extended anyway independently of BBB, even though according to the most advanced renewable developers – NextEra, Enel – they are just noise and don’t actually make a significant contribution to the magnitude of growth in renewable capacity in the U.S. The 2019 extension was a clear illustration of that and hardly had any tangible effect.

Currently, ITCs and PTCs are effectively passed through to customers in the form of lower purchase price for electricity (“PPA”), which in previous years was needed to accelerate the crossover point on grid-parity. Today that crossover has been accomplished and significantly surpassed by renewables: even without any ITC or PTC, renewables are generally cheaper than current new forms of fossil generation projects, which calls into question the basic need for them at all.

Irrespective of BBB, U.S. infrastructure – across both energy and transport sectors – is one of the oldest, most depleted and most inconsistently designed relative to present day requirements among developed markets. As such, we believe the need to upgrade and renew the U.S. infrastructure stock exists independently of whether fiscal funds are available to support it. Less fiscal stimulus in favour of it may mean that a larger share of the cost will be borne directly by consumers. In the case of regulated utilities, federal fiscal policy plays little to no role in the economic support of infrastructure investments.

The Build Back Better act (“BBB”) included ~$500 Billion allocated towards combatting climate change through acceleration of investment in climate related infrastructure and technologies. With Ecofin’s private renewable energy strategy predominantly focused on investing in construction and operating stage solar and wind power projects, the setback on BBB does not have a material impact on our portfolio or outlook for 2022. In December 2020, the Consolidated Appropriations Act (“Act”) provided a 2 year extension of the solar ITC (at 26% through 2022, 22% in 2023) and a one-year extension of the wind PTC for projects to commence construction. The Act’s tax credit extensions for developers to start construction and qualify for the associated tax credit rate actually extend the term for projects to complete construction through 2025 under IRS safe harbor provisions. Considering the U.S. solar industry had 81 GWs of solar projects in development (as of Q3’2021) that secured revenue contracts and wind projects in advanced development exceeds 15 GWs this year, the near to medium term policy outlook for the sustained growth of U.S. solar and wind remains positive. Having said that, BBB would have established transformative policies including tax credits for battery storage and other technologies central to integrating intermittent renewables and accelerating the energy transition this decade. Based on our research and analysis, we believe that the majority of the climate related provisions such as tax credit extensions for solar and wind and a new credit for standalone battery storage will re-emerge in 2022 through scaled back legislation or a tax extenders bill.

Bottom line, for Ecofin’s private renewables group. We believe there is zero to negligible impact on our 2022 strategy given that we have a strong pipeline backlog ($100MM+ under exclusivity/committed) and BBB has no discernible impact on Ecofin’s existing private renewables portfolio. More than BBB, we see supply chain constraints and equipment cost escalation as larger threats to the 2022 growth forecast for U.S. solar and wind projects. We’re seeing developers electing to push out timelines for projects to commence construction (from 2022 to 2023) with a view to obtaining better economics and mitigate performance risk as supply chain bottlenecks are presumed to ease.

We believe the potential BBB failure is relatively insignificant to the Waste Transition space; there have been far more important issues for prospective growth. First, the release of new Renewable Volume Obligations for 2020, 2021, and 2022 under the Renewable Fuel Standard (coupled with the denial of 65 pending Small Refinery Exemptions), which supports continued growth in the organic waste-to-biofuel segment. Second, the expanded power and lending capacity of the USDA and DOE in support of loan-guarantee programs that directly support new biorefinery projects. Next, renewed talk from State of California that they will not meet their 2030 GHG goals at current reduction levels, with a suggestion that the State will ramp-up their reduction efforts, perhaps by further supporting their highly successful Low Carbon Fuel Standard (LCFS) program. And last, the implementation of state-level recycling mandates, which in part alleviate the need for federal-level programs. All of these things are happening irrespective of BBB.

Renewable development in the U.S. is not dependent on subsidies, it is supported by the economic superiority of renewables over coal and gas which has been solidly in place for 2-3 years now and is just accelerating in the current environment of high commodity prices. The only notable exception there is offshore wind, where state budgets seem to be happy to continue paying for higher feed-in prices to reap the major economic benefit of such large infrastructure investments. However, it should be stated that the near-term acceleration for the adoption of some emerging energy transition technologies and the overall momentum of the energy transition trend in the U.S. could be more muted should the bill not be passed.